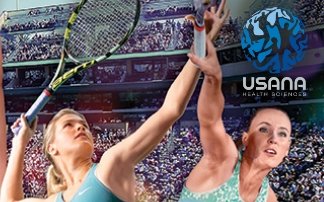 USANA Health Sciences and the WTA have kicked off their third annual Aces for Humanity campaign in support of the USANA True Health Foundation, a nonprofit organization whose mission is to provide immediate and long-term assistance to suffering populations worldwide. USANA is a global nutritional company and has been a longstanding partner of the WTA since 2006.

Collectively, 430 aces were recorded by USANA Brand Ambassadors during last season’s campaign, with Keys leading the group with 138 non-returnable serves. Through this program and other charitable efforts, the WTA has contributed over $115,000 to the USANA True Health Foundation since 2011.

“One hundred percent of every dollar donated to the Foundation goes directly toward helping those in need of assistance,” said Deb Jordan, president of the USANA True Health Foundation. “The support we have received through the WTA and our Brand Ambassadors has allowed us to help millions around the world and we couldn’t be more grateful for their continued support and partnership.”

“I’m really impressed by USANA’s commitment to helping others and what the USANA True Health Foundation has accomplished over the past few years,” said USANA Brand Ambassador Caroline Wozniacki. “I’m proud to be part of this campaign and to help raise more awareness to their efforts.”

This year the program will also involve regular social giveaways, including autographed tennis balls and USANA product. For official rules, head to wtatennis.com.

“The WTA is proud to support the significant efforts of USANA’s True Health Foundation,” said Steve Simon, WTA CEO. “Through our partnership with USANA and the Aces for Humanity campaign, we are able to provide meaningful assistance to those in need, which is something we value greatly.”