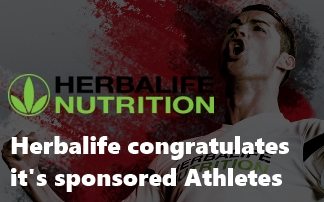 Herbalife, a global nutrition company, applauds its sponsored athletes and teams around the world for their accomplishments over the past three months, including medals at the 2016 Olympic and Paralympic Games, world records, championships and advanced league rankings. Herbalife Nutrition supports more than 200 teams and athletes globally.

“Herbalife’s mission is to help people around the world live healthy, active lives, and these outstanding athletes are an inspiration to us all, showing us what can be achieved through hard work and dedication,” said Michael O. Johnson, chairman and CEO, Herbalife. “We are proud to fuel their performance with our endurance, hydration and recovery nutrition products.”

Herbalife Nutrition-sponsored athletes use Herbalife products before, during and after training and games. As part of its ongoing commitment to improving sports nutrition and performance, Herbalife Nutrition launched Herbalife24 CR7 Drive in collaboration with Cristiano Ronaldo, a sports drink designed specifically to meet the nutritional needs of the global soccer legend and benefit athletes of all levels.

Read the Press Release
This article was originally published by Herbalife