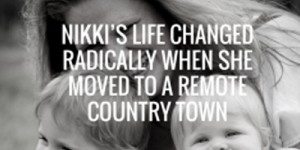 Nikki Corkill has never been happier with her life. This was not what she expected to happen when she changed from being a city girl – born and bred – to the remote central Queensland mining town of Moranbah. To say she was nervous is an understatement. Her husband had accepted a new job so she, along with their children, made the move to Moranbah, a town of less than 10,000 people, where she didn’t know a soul and expected it was going to be hard to fit in.

Luckily she couldn’t have been more wrong! Just before she left, her son had been involved in an accident with some nasty household cleaners and on the ambulance ride into emergency at the Royal Children’s Hospital in Brisbane, Nikki had decided that she needed to change the way she lived and find an alternative to the chemical cleaning products she was using in her home. Soon after, she was invited to a party for Norwex, a clean, chemical free brand of household cleaners. Although she was initially sceptical and ‘embarrassed’ to have anything to do with one of those ‘party plan’ events, she was surprised to find she loved both the products and the atmosphere.

Skip forward nine months and suddenly she was off to Moranbah. Her sister suggested she might like to try selling Norwex when she moved. It would give her an excuse to meet people and might also give her a little pocket money whilst ensuring she would be able to get the products when she was so far away from the city. Nikki thought “why not?” – even though she still cringed at the thought of becoming one of ‘those’ women that stand in front of others a flog a product. She was in for surprise though!

As Nikki says “I now thoroughly enjoy doing parties for others and it’s become my “me time”. I’m either going to be catching up with friends at an in-home demo or making new ones. My family and I have been in Moranbah since August 2010 and I can say without question some of my most treasured friends were hostesses and party guests. By bringing Norwex to Moranbah I have been able to change the attitudes of so many in the town when it comes to reducing the use of chemicals in the home and creating safe havens.”

She goes on to say “My passion for Norwex and my personality has allowed me to fast track acceptance in such a small town. I love that every time I go out I run into men and women I know through this amazing career. People in Moranbah know Norwex and trust me. It’s an amazing boost of my self-confidence to know that I have the trust and respect of my town because of what I’ve brought to them.”

To be able to turn what was a daunting and scary move, into a positive, and change from being a ‘city girl’ to becoming a ‘country woman’ who is fully integrated into her new home town, where she has loads of friends and a business that is thriving (on her own terms) is amazing. Who would have thought that such a radical change would have such a positive outcome?

Comparable in size to the Processed Food and Vegetable Industry, the direct selling industry contributes almost $1.7 billion to the economy through the employment of over 475,000 people signed up to various direct selling organisations (mostly part time) with over 250,000 of them actively working at any one time. Direct selling seems to particularly attract people who live in the lower socio economic areas of Australia. So not only does direct selling allow people flexibility in their working lives, it also supplements low incomes. Many of the people working within the industry find that the socializing it entails makes it attractive as it builds their personal networks and self-esteem.