How One Day Built a Better Tomorrow If I were to tell you that 25 volunteers were on their way to Tijuana, Mexico, to build a house in less than eight hours with little or no construction experience, what would you say?

I’m either crazy or they are a very special group of people, right? Okay, so they did have a couple experienced workers overseeing the project, but these USANA Associates and volunteers from our partners at International Relief Teams pulled off the task with flying colors. A bright shiny blue, to be specific, which was a bold contrast against the stark reality of the surrounding environment.

This feeling was shared mutually by the other USANA Associates: Nydia Beltran, Tessy Monsivais, Mara Valdez and Sheila Alcantar, all from Mexico themselves.

It all started with an early morning bus ride across the border where we met up with John Zawis, our amazing lead builder on the project. He quickly divided up all 25 volunteers into groups of painters and framers and work started immediately. For the next eight hours, all you could hear was the banging of hammers and the whining of saws. And that was the only thing that was whining. Every single person was so intensely enthusiastic and they never let up. Sweat was dripping off foreheads, paint was smeared all over faces, and the wind blew endless dust into their eyes. Not a problem.

These volunteers were helping Jose Luis Gonzales-Valdivia, his beautiful wife, and three children so they could move out of the primitive house they have been living in this past year and move into a secure structure they can be proud to call home. That’s all the motivation they needed to keep their spirits up and keep working.

Originally from Guadalajara, this family moved to Tijuana about five years ago to make a better life. They built their previous home themselves out of scraps and tarps. Jose Luiz works as a traveling vendor and makes about 1,200 pesos ($75USD) a week. Mom, Yoana,  is a homemaker and takes care of their three children. They’re such industrious and committed community residents that their neighbors volunteered them to receive the gift of a new home.

It was an emotional day to say the least. There was hardly a dry eye in the area when Rich Yousko, IRT board member, handed over the keys to a structure built out of much more than wood, nails, screws, and paint, but a house made of love. 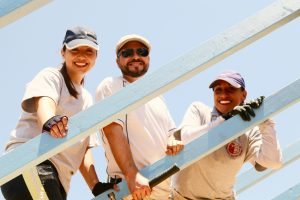 I felt it, the volunteers felt it, and it was so apparent that the Gonzales-Valdivia family felt it. We will always remember this day, when lives were changed and hope was renewed.

As the director of communications for the True Health Foundation, my job is to document these incredible stories of impact in photo and video for you all to see. We would like to thank all of our volunteers and donors who made the seemingly impossible a reality. It could not happen without you.

Watch a time-lapse of the whole build!

“It’s great to see so many people looking out for others. I feel so blessed being a part of the USANA family and having the opportunity to help people in need”
Raul Izasmendi Lara
“I am grateful to have a home that will protect us from the cold and heat and keep our food clean and free from dust. I am so happy to have a beautiful home for my children”
Yoana Gonzales-Valdivia